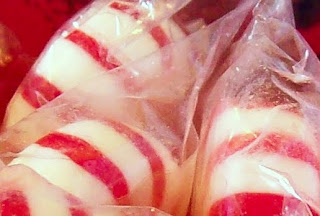 Ever since I received my February Family Fun magazine, I've been bombarded and jealous of all these people who come up with these nifty Valentine phrases using a play on words. I was sad to not be able to come up with anything on my own, but was getting over it. And I really also had no idea what I was going to do for valentines. I "splurged" and bought a bag of Starlite Mints for Valentine goodies when doing my weekly grocery shopping. Actually, splurging would have been if I bought Hershey chocolate Kisses. I decided to buy the mints because they were only 99 cents for the bag, opposed to the $2+ for the chocolates. Anyway...now to put something together...I snatched some paintings from the fridge that my pirate and I did weeks ago, and made origami gift boxes from them (here's a good origami gift box tutorial...I've been making boxes like this since grade school)...and all of a sudden, just like that...it hit me...

...I wrote it on a ribbon and tied it to a closed, mint-stuffed box to give away as a valentine! 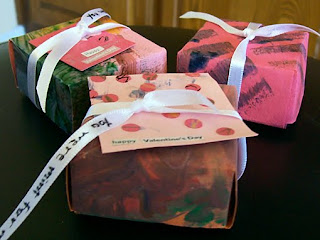 Then, I started getting a little carried away and made a paper tube filled with mints...this will be something the little pirate can give to Grandma and Grandpa! 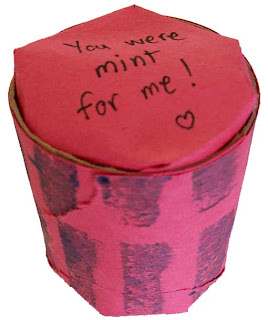 Amber
I have a deep desire to create. I'm fascinated with creating new things from scraps, leftovers or abandoned items from other projects I completed, or forgot about completing, with the goal of not having to buy more supplies to create a finished product. By the way, my middle name is “frugality.”

Bracelet of the Month: May 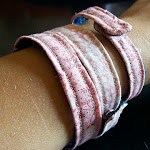